Why The Wasp Stings 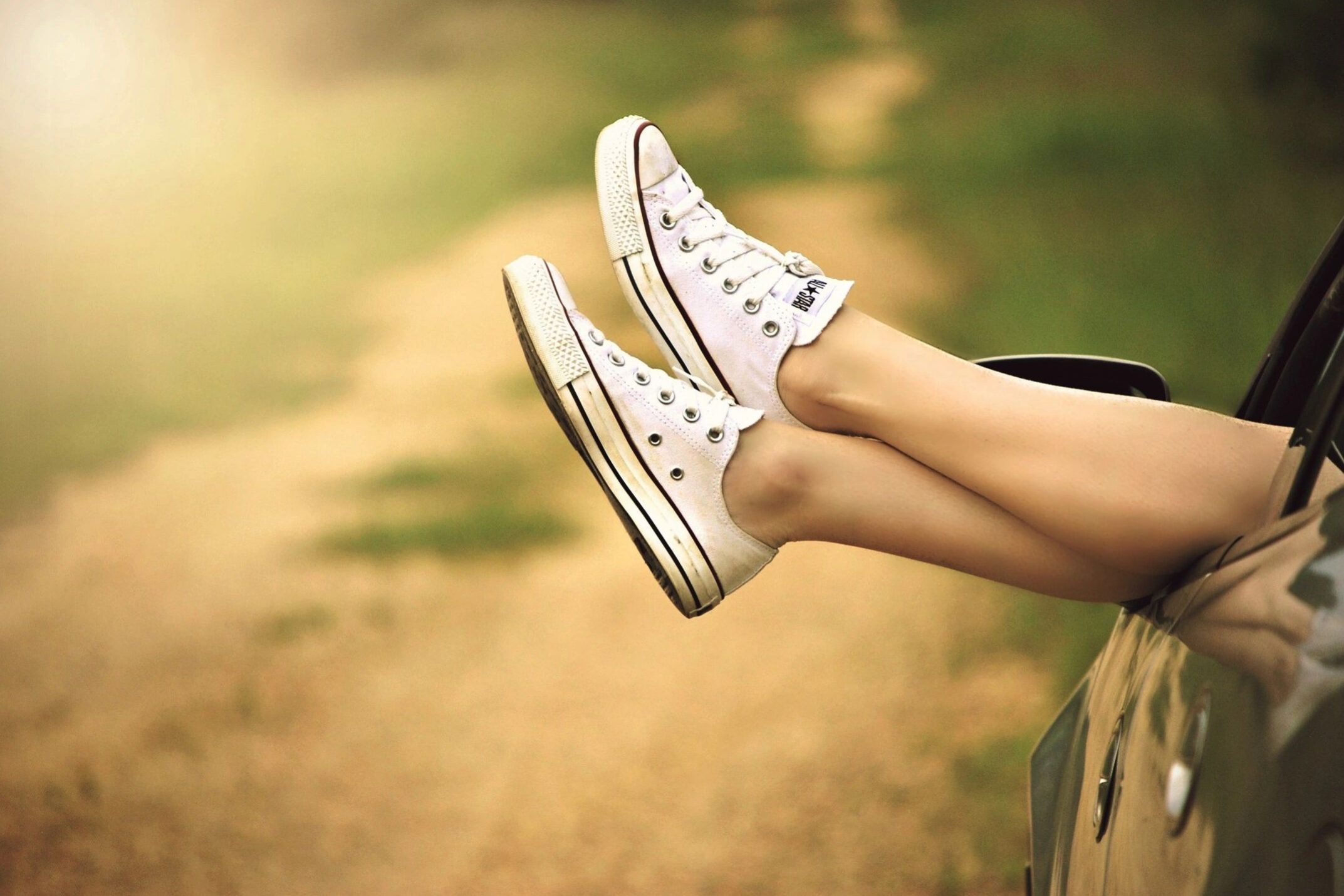 Did you know that only “social” wasps sting?  Most of the 20,000 species of wasps in the world are solitary and solitary wasps do not sting, so the wasps that most humans are more familiar with are social wasps who live in complex communities and that are normally very easy to spot.  Very few social wasps, such as paper wasps, mud daubers, yellow jackets, hornets, and umbrella wasps, create homes near human dwellings.  So why is it that most humans have been stung at some point or another?  This blog will hopefully give you insight into the dreaded wasps and who the wasp stings.

Wasps are classified in the same insect order (Hymenoptera) as bees and all wasps (as well as bees) play vital roles in our ecosystem.  Wasps are the pinnacle of animal architects. They construct hanging nests (hives) from structures or build subterranean combs or ground nests. When wasps build hives, they don’t re-use them from year to year, because they disintegrate over the winter. Ground nests, on the other hand, are extremely durable. One type of wasp in South America builds such resilient structures that ground nests from the 1700s are still intact today.

Of course, you might not be really concerned about wasps in South America when you live in Virginia, so let’s go over our own threats.

Wasps and stings may go hand-in-hand, but yellow jackets take things to a whole other level. Known for their aggressive nature that frequently involves chasing unprepared victims, yellow jackets are one of the biggest insect “bullies” out there. This wasp species is named for its yellow and black color design, measuring from 3/8 to 5/8 inches long and are attracted to food odors, so they’re likely to join you for your coffee and scone if you happen to be outside enjoying them.

While yellow jackets are a little slower to sting than other wasp species, the insects aggressively look after their colonies. Like other wasps, yellow jackets are able to sting repeatedly, making them a risk to anyone who may be allergic to them and just a downright nasty bug. An infestation is unlikely to result in structural damage to your home or business, but since they are stinging insects, it’s still not a good thing to have a nest near you.

Larger than a wasp and possessing the ability to deliver a more painful and powerful sting, hornets are a concerning foreign species. That’s right – they’re not a North American native. This type of wasp was a stowaway when the Europeans began exploring our continent, eventually spreading all throughout it. Today, hornets are usually found along the East Coast, and they’re largely common in Virginia – the original settling point for many explorers.

Like ants, hornets are social creatures. The pests will go after anyone or anything that enters their space. Hornets have smooth stingers that allow them to attack over and over again. A hornet sting is many times enough to knock a 230 lb man to his knees.  Hornets are very nasty. 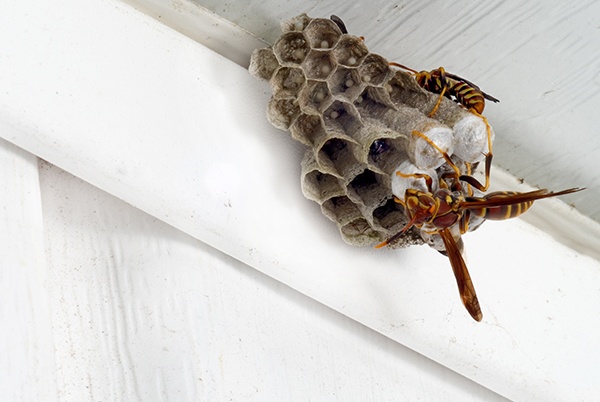 You’ll know a paper wasp by its narrow body and dark brown color. This species has black wings with yellow markings, making them look a bit like their close relatives in the yellow jacket. the paper wasp likes living in sheltered places, which means they may look for nesting spots in or around your home where they’re not easy to detect. While the insects are mainly beneficial to the planet because they aid in pollination (similar to bees), they’re still bad news for their aggressive stinging habits.

Paper wasps make paper nests, hence their name. The nests look like round, upside-down combs. Every year, a paper wasp colony starts as a single queen. Once she locates a good nesting spot, she’ll build a small comb nest in which to raise her first larvae. After the larvae mature, they begin to search for food, increase the size of the nest, and take care of the queen’s new young. Before you know it, the small nest on your property may grow into an out-of-control problem.

Paper wasps are known to be predators, feeding on common pests like spiders and caterpillars. But while this is another benefit of their presence, they equal it out with highly protective tendencies. If they feel threatened, they won’t hesitate to defend themselves vigorously, so steer clear of paper nests. A sting is extremely painful, and the reaction is much more severe if you’re allergic.

Around 900 species of the world’s social wasps live in highly organized societies consisting almost entirely of females. A single female yellow jacket begins a new colony each spring. During the summer, worker wasps emerge, and the colony begins to grow to as large as 25,000 individuals. This is usually when the nest becomes noticeable to humans. But in the fall, colonies will begin to decline as the male workers die and the queens leave their nests to search for places to hibernate, such as under loose bark or in decaying stumps.

Yellow jackets and wasps are elaborate and fascinating social insects who communicate with each other through the complex use of chemicals known as pheromones. Wasps and other insects use different hormones produced in their bodies to signal where food can be found or to alert the colony to the presence of an intruder. For example, when a wasp stings a human approaching a nest, the small insect simultaneously emits a chemical that signals the rest of the colony to attack.

Only female bees and wasps can sting. Unlike bees, these female wasps have the ability to sting a target multiple times because their stinger does not fall off after use.

If yellow jackets seem more aggressive than bees or hornets, it’s for a good reason. They are the only wasps in North America who produce a large amount of offspring. Because of this, their nests offer a great nutrient jackpot to predators like raccoons, skunks, and bears, causing these wasps to selflessly defend their families.

Yellow jackets will not sting a person at rest if they have not been disturbed by some agitation of their nest or threatened by swatting or other quick movement of the arms or legs. They may land on your skin to inspect a smell or get water, but they will leave if you stay calm and do not move quickly.

Because of the beneficial predatory role that wasps play in suppressing a wide variety of insects, your objective should be to reduce encounters with these animals, not to eliminate them from the area entirely. Wasps eat ticks and feed their young other insects such as houseflies and blowflies. They also pollinate crops such as melons and spinach.

See Also Tips On How To Escape Summer Pests 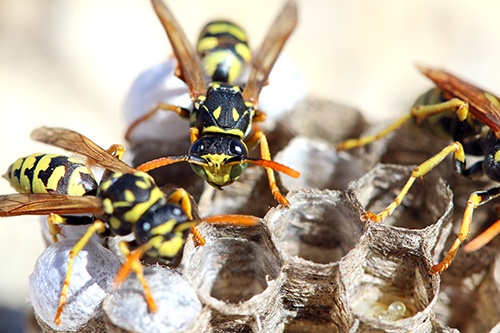 Why The Wasp Stings And How To Avoid Getting Stung

To avoid contact with wasps, never work in the yard or garden wearing yellow or white, since these colors attract insects. Many insects cannot see red, making it a good color to wear when working in the yard. You should also minimize olfactory enticements such as perfumes, colognes, hair sprays, and other fragrances, and by all means, never walk barefoot.

Don’t leave outside lights on any longer than you have to at night, since this attracts insects and everything that eats them. You should also avoid squashing a wasp—the action causes the wasp’s dead body to release a chemical alarm that signals other wasps in the area to attack.

Avoid sugar and meat snacks, especially in open containers, and keep garbage cans well sealed and as clean as possible. Companion animals should be fed indoors or on screened porches. If you have playground equipment, make sure you plug the ends of the pipes to prevent wasps from settling in them.

Communal wasp colonies easily maintain and reproduce their population, so removing individuals will not effectively reduce their numbers. The whole community must be removed at once, which can be a dangerous task, so it’s far better to leave the wasps alone during the problem season, and then seal up the points of entry during the fall or winter.

If a wasp enters your moving car, pull over to the side of the road and stop if possible. Open the car windows or doors and wait for the insect to leave. If the wasp is moving slowly, deliberately guide the animal out of the vehicle with a piece of paper.

If you suspect that wasps, yellow jackets, mud daubers, or hornets have infested your home or property, take steps to remove them before their stinging threat becomes a reality. CONTACT Holistic Pest Solutions to learn more about our treatment plans for Wasps – fill out our contact form on this website or give us a call at 434 842 1700, whichever is more convenient for you.  Whether you’re in Charlottesville, Waynesboro, or close by to either, Holistic Pest Solutions is mindful of our clients AND our Earth.