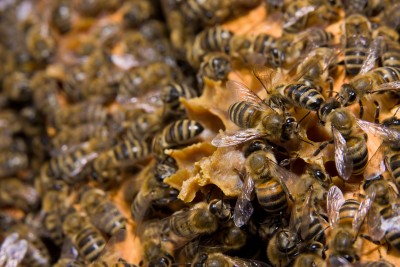 Many yellow jackets are ground-nesters. Their colonies can be found under porches or steps, in sidewalk cracks, around railroad ties or at the base of trees. Sometimes the queen uses a wall void of a building as a nesting place. Some yellow jackets build aerial nests in bushes or low-hanging branches or in the corners of buildings and other manmade structures.

Q: What are Paper Wasps and are they dangerous?

A: Paper wasps can and will sting in defense of their nest, or when threatened. Unlike honeybees, which have barbed stings and can only sting once, paper wasps can sting multiple times.  Though paper wasps are beneficial insects, they tend to nest in close proximity to people, putting us at risk for stings. In some cases, it may be necessary to control paper wasps to minimize such risk.

Q: Can hornets damage my home?

A: Hornet nests are constructed with paper-like material produced by the hornets mixing their saliva together with the wood fibers they gather. During the time that nests are being built, it is common to see hornets scraping away a thin layer of wood from where ever is convenient. While hornets are known for their ability to inflict a painful sting, they are very beneficial predators and help to control a variety of insects that could otherwise become pests. Hornets are social insects and will aggressively defend their colony (nest) from any intruders. The hornet adult’s diet consists of insects and plant nectar they consume to augment their dietary needs.

Hornets are the largest of wasp species that commonly infest properties. They will build their nests on atop trees, utility poles, sheds, in shrubs etc. Though these insects do not sting humans unless provoked, some people are allergic to their venom and can have very dangerous reactions to a sting and their stings can be extremely painful.

Q: There is a swarm of bees in my garden. What should I do?

A: Swarming bees look spectacular, but they are usually not aggressive. However, it is best to keep children and pets safely indoors. Do not try to scare the bees away by waving your arms wildly at them or throwing water at them as this is liable to aggravate them. Swarms that have settled in the open, for example in a bush or hanging from a branch, usually move off to a permanent site within a few hours. If the bees are easily accessible, a local beekeeper may be willing to remove the swarm. Don’t try to remove the nest or kill these very beneficial bees.  Call us and we’ll give you someone to contact that will remove them safely without killing them.

A: Honey bees leave their sting behind in your skin and this continues to pump venom into you for a few minutes. You should therefore scrape it off straight away with something with a straight edge. You may have to improvise, but this can be done with a long fingernail, a blunt knife, or even the edge of a credit card. If the sting is on or near your hands, remove any rings straight away in case of swelling. Stings hurt for a while and may itch for a few days, but usually there are no serious effects. However, some people can be severely affected, so if you have any symptoms away from the site of the sting or are concerned, particularly if you are having difficulty breathing, seek medical advice straight away.

Q: I have seen little mounds of earth and small bees tunneling in my garden lawn. What are they?

A: These are most likely to be solitary mining bees. There are many species of mining bee throughout the world.  Every spring the females excavate tunnels as nests in which they lay eggs. Each egg is laid in a cell and is provisioned with a ball of pollen mixed with nectar. At the top of the tunnel, there is a mound of excavated soil, somewhat like a worm cast, and sometimes you can see the females sitting on the mound sunning themselves. These bees will not harm you and help pollination.

Q: I have seen lots of very small bees flying together close to the ground. What are they?

A: These are most likely to be solitary mining bees. Every spring, the males congregate together in the hope of attracting females. There are many species of mining bee throughout the world.

Q: Are honey bees the only bees important for pollination?

A: No. There are many other bees and insects that are important for pollinating our orchards and crops, e.g. bumble bees and solitary bees. There are over 25, 000 different species of bee in the world and many of them are under threat. In the UK, of the 254 species of wild bee (solitary and bumble bees), 25% are in the Red Data Book of endangered species. About 80% of the food on the supermarket shelves is there because bees have pollinated crops — without bees we would starve!

Q: I have seen small bees making holes in my wall. Should I worry?

A: These are solitary bees and it depends on the species of bee whether they will damage your wall. Most mason bees (e.g. Osmia rufa) nest in pre-existing cavities and do not harm the walls. However, there are ‘true’ masonry bees, e.g. Colletes daviesanus, that tunnel into soft mortar and can do damage, especially in old walls. If you have bees in your wall you could tempt them away from the wall by putting out artificial nests for them – they often prefer these nice clean tubes.

A: Like almost all female bees, solitary bees do have a sting, but they are not aggressive and are very unlikely to sting unless you handle them very roughly. Honey bees have a large store of honey to protect, which is why they sting to defend their homes; solitary bees do not have these stores.

Q: Honey bees die after stinging, do bumble bees die also?
A: No. Honey bee workers (non-reproducing females) have barbs on the sting that get stuck in the victim’s skin. As the bee struggles to free itself, the sting and venom sac are pulled out of the bee, resulting in death. Bumble bees do not have barbed stings and can sting many times if they want to. However, bumble bees are not aggressive and only sting if provoked.

Q: I have a honey bee nest in my cavity wall. What can I do about it?

A: The bees won’t do any harm to your walls, so if they are not causing problems leave them alone and enjoy your new neighbors. However, if they are a nuisance you may have to get rid of them. It is not easy to get them out — spraying with insecticide is unlikely to kill them all and any remaining wax comb should be removed or it will attract other pest insects.  Again, if the bees are easily accessible, a local beekeeper may be willing to take them. Call Holistic Pest Solutions and we’ll give you someone to contact that will remove them safely without killing them.