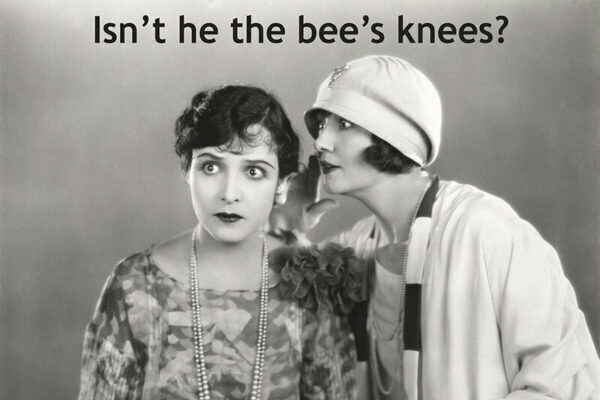 I think we’ve all heard the phrase, “the bees knees”, but do we know what the heck it means?  Yes, I know this is supposed to be a blog about actual pests and not idioms about their knees, but hey, we all have to have our fun!  Let’s find out what the origin of “the bees knees” is and how it has buzzed it’s way into several different countries over the years.  We might even get into the “cat’s pajamas” while we’re at it!

The phrase was first recorded in the late 18th century when it actually meant something entirely different than what we know today. The expression ‘the be-all and end-all’, meaning chiefly ‘the central or most important element’ is (like ‘one fell swoop’) a quotation from the Shakespearean play, Macbeth. Macbeth is contemplating killing Duncan: “..that but this blow/Might be the be-all and the end-all. (Macbeth, I.vii.4ff).  This passage is a well-known one, and the phrase ‘the be-all and end-all’ has been popular over the years.

After years of use, ‘the be-all and  end-all’ became shortened to: the Bs and Es (the be-all and end-all), the Bs being the things which are all and the Es being those things which end all.  As this was said, over time (if you repeat this fast, you will see), it sounds like ‘the bee’s knees’. So, something which had nothing to do with the little insects is now lost from its original, but the phrases background only grows from there.

Its current meaning dates from the 1920s, at which time a whole collection of American slang expressions were coined with the meaning ‘an outstanding person or thing’.  The switch in meaning for the bee’s knees may have emerged because it was so similar in structure and pattern to other old phrases from good old England – cat’s whiskers, cat’s meow, gnat’s elbow, monkey’s eyebrows and even the dog’s bullocks.  Those witty brits 🙂 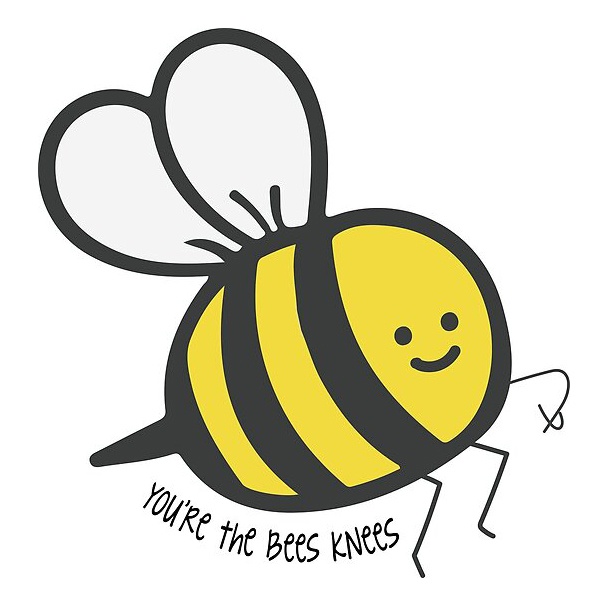 So here’s the burning question –  “Do bees actually have knees?”. Well, yes they do. Not exactly like human knees, though. While we have one knee (or place where our leg can bend at a joint), bees have six leg sections and each is connected by a joint. These joints aren’t usually named but what better name than knee? The joint between the femur and tibia is the most ‘knee-like’.

Bees carry pollen back to the hive in sacs on their legs. It is tempting to explain ‘the bee’s knees’ as alluding to the concentrated goodness to be found around a bee’s knee, but there’s no evidence to support this explanation. It is also sometimes said to be a corruption of ‘business’, but there’s no evidence to support that either.  It is true that when bees flit from flower to flower, the nectar sticks to their legs. So our final answer is that the phrase “the bee’s knees” means sweet and good, because the knees of the bee are where all the sweet, good stuff is collected.  That’s as good an answer as any, right?

Now how about those cat’s pajamas?  Again, in the 1920’s in America when the bee’s knees came back into popularity, the word “cat” was also being used to refer to a flapper or otherwise “cool” person. Since pajamas were simultaneously being introduced as a fairly new, and a fairly daring (like the flappers) clothing style choice, the term “the cat’s pajamas” came to refer to something that was the very best of its kind. I expect that this expression also connoted something rather risqué, at least initially, although the expression seems to have lost this alluring connotation in today’s world. But we’ll leave that there since we’re sort of going down a rabbit hole with idioms.

We hope you enjoyed our satirical blog.  We hope your day is THE BEE’S KNEES and that you’ll CONTACT Holistic Pest Solutions if you want to learn more about our treatment plans for pests or give us a call at 434 842 1700.  Whether you’re in Charlottesville, Waynesboro, or close by to either, Holistic Pest Solutions has the perfect plan for you!  Our treatments are mindful of our clients, and our Earth.

You may also be interested in 5 Facts About Hornets, The History of the Mosquito,

Benefits of Having a Termite Inspection
July 23, 2020