The Eastern subterranean termite is the most common and widely distributed termite in the USA.  Swarming generally occurs during the spring but occasionally a few smaller swarms may occur during the summer. Swarming most often occurs during the morning following a warm rain shower whereby the soil temperature is around 70°F. What’s good to remember is that Virginia’s Easter Subterranean Termites are a problem when they’re NOT SWARMING.

Eastern subterranean termites are highly destructive to douglas fir and other common building timbers. They can rapidly eat out the internal sections of structural timbers – devouring mainly the spring wood, and preferring to leave the harder summer wood sections. As a result, infested timbers are often left as a thin shell with a honey-comb of layered hollow sections (as illustrated) packed with moist soil. These termites love a moist dark damp environment – it is essential for their survival – discussed in detail under Biology of Subterranean Termites – later in this blog.

The Eastern subterranean termite is a serious economic timber pest causing millions of dollars of damage throughout the areas where it is located. It is estimated that more than 1 in 5 homes in the high activity areas, been or will be attacked at sometime by these voracious little insects.

The life-cycle of subterranean termites

The queen termite is an egg laying machine; her body is enormous compared to her off-spring; she can live more than 25 years and produce more that 2,000 eggs a day.

The king and queen live in a central chamber and are tended by the workers.
The workers are by far the largest caste in the eastern subterranean termite colony and they are the ones who do the most damage.  They are a creamy translucent color, soft bodied and carry out all work in the nest, including gathering food (timber and other cellulose); constructing tunnels; repairing and enlarging the colony nest; grooming each other and feeding the soldiers, the king, queen and also caring for the young nymphs until mature.

Identification: Eastern subterranean worker termites are small in size, about half the size of match-head or 1/8″ long and are soft bodied insects. They have no wings, are sterile, blind and work 24 hours a day for their entire 2 year life span.

The soldier termite is usually the first to be seen in large numbers when any active termite workings (mud shelter tubes or damaged timber) are opened. Soldier termites will rush out to guard the opening whilst worker termites repair the breach.

The swarmers (reproductives) are called “alates” and are commonly seen when they swarm during daylight; they have eyes; are poor fliers but are swept along by the wind; they land, drop their wings, find a mate to become king and queen of a new termite colony. 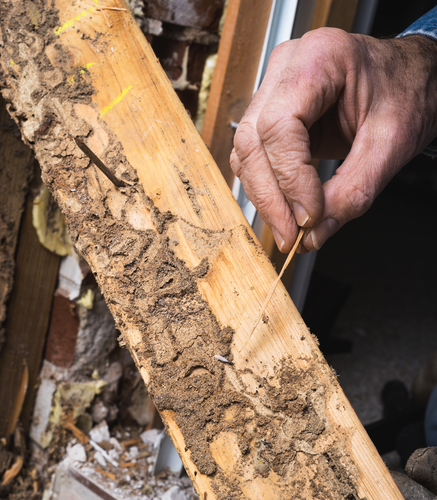 When do they swarm?

In the southern areas like Virginia, swarming usually follows rain and occur n the Spring – although we’ve been seeing swarms in the summertime as well. To be clear, just because you don’t see a swarm does NOT mean you don’t have termites.  The swarmers can number in the thousands when a mature termite nest is large and well established. Eastern subterranean termites swarm in large numbers over a wide area to find a mate from another colony nest to start up a new colony. A suitable location for nesting should provide moisture and a readily available timber food source close by.

Colony nest development is slow in the first few months, with the egg-laying capacity of the new queen termite peaking after a few years, producing up to 10,000 offspring a year. The queen may live for many years and workers up to two years. Swarmers are usually produced after this period and are an indication a large termite nest is in the vicinity, a sure danger sign and a warning that professional protection is required.

Several years are required before the termite colony reaches the typically mature size. In some locations an Eastern subterranean termite colony can contain several million termites foraging over a wide area (up to 12,000 square feet) and actively feeding on trees and freestanding poles as well as buildings and other timber structures.

If you find these termites, do NOT disturb them

Tips On How To Escape Summer Pests