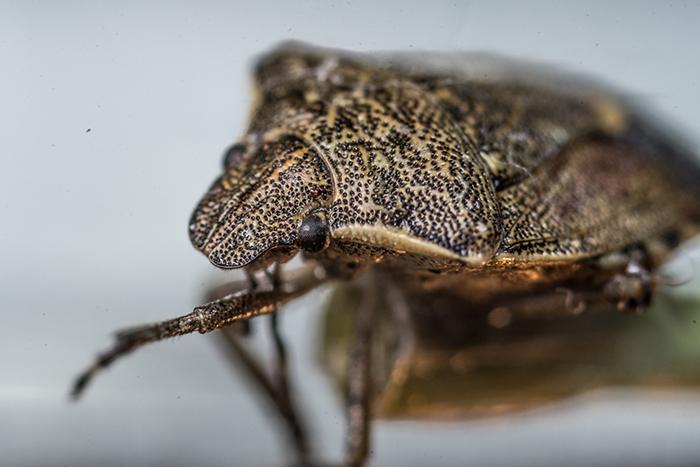 Stink Bugs are an invasive species that was brought over to the United States from Eastern Asia in the mid-1990s. Today, stink bugs are most prevalent in the mid-Atlantic region in general, but in our state of Virginia, they have a bad reputation for being a BIG annoyance.  This article will help you understand these little stinkers better and guide you to stop stink bugs before it’s too late.  Because once the stinkbugs come in for their winter’s nap, you’ll have a long Springtime of annoying and smelly bug houseguests.

How Serious Are Stink Bugs?

Stink bugs can damage ornamental plants and gardens, however, they don’t typically cause any structural damage or spread disease. Stink Bugs are more of a nuisance than a threat. Glands between the legs of stink bugs release an odor that becomes strong and difficult to shake when they are crushed. They will frequently die in light fixtures, making rooms smell, and creating lots of clean up.  They will also fly around the room, get trapped in your hair and window blinds, and crawl on your walls and ceilings.

Signs of a Stink Bug Infestation:

Where Do They Live?

If you need help controlling stink bugs in your home, contact the experts at Holistic Pest Solutions. Our stink bug control services are developed specifically with your family and pets in mind. Holistic Pest Solutions serves Charlottesville, Keswick, Ivy, Crozet, Hollymead, Earlysville, Afton, Waynesboro, Fishersville, and Staunton as well as the counties of Albemarle, Fluvanna and Augusta in the State of Virginia. CONTACT US today.

See also: Why Are There So Many Stink Bugs in My House?